Al-Duhail Qatari player: I like Maaloul, Kahraba and Qafsha … and Sherif Khalifa is tired – MasrawySoft Skip to content 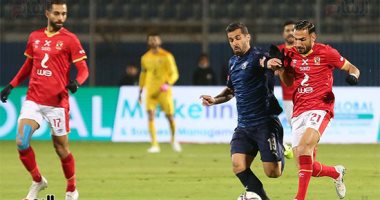 Ahmed Yasser Al-Muhammadi, the Qatari player from Al-Duhail, spoke about the upcoming confrontation of his team with Al-Ahly club, at the beginning of the two teams’ journey within the competitions of the FIFA Club World Cup to be held in Qatar, and Al-Mohammadi said in statements to the “Evening On Time” program: “The Club World Cup is an important tournament and any A player wishes to participate in it. We will play Al-Ahly. The winner will face Bayern Munich, which is a difficult match, but football is not impossible. Al-Duhail is currently in third place in the league. “
He added: “Our league was pressed because of Corona, there was no time to play special matches for this tournament, and I like the performance of Maaloul, Qafsha, Diang, Kahraba and Al-Sulayyah from Al-Ahly.”
He concluded: “Al-Ahly is a complete team without fault, as a defender I heard about Mohamed Sharif, that they likened him to Emad tired. I played with the national team in Qatar during the last period, and I have been playing with Qatar national teams for some time, and I hold the Egyptian and Qatari nationalities.”
The technical staff of the first football team at Al-Ahly club, led by South Africa, Pitso Musimani, decided to hold a training session for the team at ten in the morning, Friday, before heading to Cairo Airport to travel to Qatar on a private plane to participate in the FIFA Club World Cup to be held in Qatar.
The Al-Ahly delegation in the FIFA Clubs World Cup is headed by Mahmoud Al-Khatib, president of the club, and the mission includes Engineer Khaled Murtaja, member of the board of directors, Al-Ahly’s coordinator at FIFA, and Brigadier Mohamed Morgan, the club’s executive director, and the security coordinator at FIFA. For Al-Ahly, Jamal Jaber, Director of the Media Department of the club, Dr. Mohamed Shawky, Chairman of the Medical Committee, to follow up all medical procedures, Amir Tawfiq, Director of Contracting and Marketing Department, his deputy Ashraf Omar, and Hanan Al-Zaini, in charge of regulations licenses at Al-Ahly, in addition to The ball team and the technical, administrative and medical apparatus.
Al-Ahly faces its counterpart, the Qatari team, Al-Duhail, on February 4, in the quarter-finals of the FIFA Club World Cup 2020, which Qatar will host from 4 to 11 of next February, which resulted in the draw that was held today, Tuesday, in the Swiss city of Zurich, the headquarters of the International Federation of Football. Foot “FIFA”.