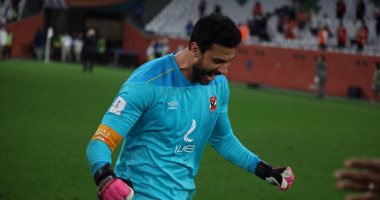 The pioneers of social media circulated, a video clip taken by one of the Al-Ahly fans from the stands of Education City Stadium, and the video documented the reaction of the fans after goalkeeper Mohamed El-Shenawy responded to the final kick of the Brazilian Palmeiras team, and the video footage showed a massive celebration of the masses in the stands in response to Al-Shenawi, while the Al-Ahly players went to their goalkeeper Mohamed El-Shenawi to celebrate his wonderful performance and his response to two penalties for the Brazilian champion.

Mohamed El-Shenawy, Al-Ahly goalkeeper, deservedly deserved to be the password in Al-Ahly’s winning of the bronze medal in the FIFA Club World Cup in Doha, after two penalty kicks from the Brazilian Al-Miras players, to ensure that the red team won the second bronze in its history after 15 years of absence For the red team, after the match that ended with Al-Ahly winning a penalty shootout with a score of 3/2 in a meeting to determine the third and fourth places in the Clubs World Cup.

Mohamed El-Shenawy, captain of the first football team at Al-Ahly club, confirmed that the team deserved to be crowned the bronze medal in the FIFA Club World Cup, due to the manly performance presented by the players, from the start of the tournament until the match for third and fourth places in front of the Brazilian champion Palmeiras.

Al-Shenawi thanked his colleagues and the technical staff, stressing that Al-Ahly players had great determination to win against Palmeiras; For the bronze medal, and we did not doubt for a moment that we could get it done.

He said in press statements: “We had a goal before traveling to participate in the Club World Cup, as we assured Al-Ahly fans on more than one occasion that crowning a medal would be our goal; which is what we committed to.”