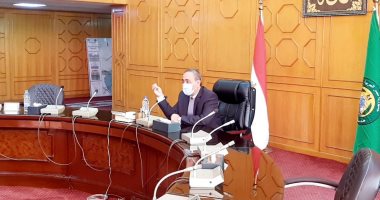 Sherif Bishara, Governor of Ismailia, was keen to attend the Ismaili club’s training this morning, in order to motivate the Dervish players to regain the team’s position in the general league competition. Bishara said in statements to the “B On Time” program: We came today with the aim of standing next to the players and Ismaili is a footballing history in Egypt and history It cannot be forgotten, and the Ismaili team of Egypt loves to watch its performance, and that is why it was known as Brazil, Egypt, and the team in recent matches began to regain its strong performances, and we came today to motivate the players to make more effort.

For his part, Ali Abu Greisha, a former Ismaili star, said: We are present today to raise the morale of the players, and the Ismaili fans are concerned because the club’s situation is not the most appropriate situation, and the Ismaili are always competing with the adults at the top, the players have a responsibility and we do not want to put more pressure on them, and they are the ones who will lift the club From this difficult arrangement, I just ask the fans not to be quick to criticize the players and give them the opportunity.

The first football team in Ismaili resumed its training, as part of the preparation program for the Alexandria Al-Ittihad match, scheduled for tomorrow, Thursday, within the framework of the eleventh round of the Premier League matches.

The technical staff allocated training on cross balls as one of the solutions to score goals.

Al-Ismaily witnessed, during the past hours, the team’s player, Muhammad al-Shami, apologizing for his recent statements to a sports program.